For 2021, MOE has decided that the Common Last Topic (CLT) of Theme 3.3: Globalisation and the International Economy has been removed from assessment in the final GCE A-Level examinations administered by Cambridge – UCLES – SEAB. Therefore, the remaining 2 topics of the External Economy (aka Global or International Economy) of Balance of Payments (BOP) & Exchange Rates are now much more important.

Under the Economics content topics found in the H2 Econs Syllabus (Code: 9757),  one of the macroeconomic objectives is balance of payments (see SG’s BOP data here.). As BOP summarises the transactions between Singapore and the rest of the world, many changes in the global economy may affect a country’s Current Account and Capital & Financial Account.

The following question (with full length sample answers) demonstrates how BOP is affected, and its consequences on an economy.

Question
(a) Explain how an increase in price of crude oil may affect the BOP of an economy both in the SR and LR for a net oil-importer and a net oil-exporter country. [10]
(b) Discuss the view that Singapore should be concerned about the effects of a rise in price oil on her economy. [15]

Introduction:
define BOP: Records transactions between the residents of the country with the rest of the world in a year. It consists of current account (CAcc), capital and financial account (KFA), as well as foreign reserves account (FRA).

Explain briefly why rise in the price of oil: maybe due to both demand side and supply side factors: Increase in demand for oil (rising global income and rapid economic growth of emerging markets like China) and a decrease in supply of oil (constraint by OPEC), etc. Effects on BOP depends on whether country imports or exports oil

Body:
Explain how a rise in price of crude oil affects the BOP of a country both in the SR and LR

Thus, the effects of an oil price shock on the BOP will be worse for a country under fixed exchange rate regime due to the absence of self-adjusting mechanism that corrects the deteriorating BOP

SR: If rise in price is due to rise dd for oil, assuming that PED of oil <1 (due to the lack of substitutes), + prices rise,  export earnings → improvement in current account. Higher oil prices → profitability of crude oil extraction → More FDI in this sector → inflows of capital improvement in KFA

Improvement of CA and FA Improves BOP→ inflows of currency → rise in ex rate → investors invest in assets denominated in the currencies hot-money inflow → further improvement in KFA. Hence, in the SR, BOP is likely to improve.

LR: In the long run, if oil importers are able to find alternative substitutes to oil, demand elasticity of oil increases → 1 in price of oil → T exports revenue for oil producing countries will not be as significant → CAcc need not improve by much. Also, in the long run, if prices of oil remains high and unstable, it affects the economy of oil-importing countries, reducing economic activity. This reduces their demand for oil and may affect the exports of oil in oil-producing countries → export revenue ! → worsening of current account in future.

Hence, in the LR, if alternative substitutes of oil emerge or if high oil prices leads to decline in economies of oil-importing countries, exports revenue of oil-producing countries will be largely affected affecting CA adversely worsening of BOP

(Or alternatively: with higher earnings from oil exports, export countries will be able to invest in overseas assets in the form of portfolio investment or FDI. This leads to outflows in the financial account worsening the KFA in the SR. However, such investments yields dividends over time →net property income inflow in future improvement in the CA in LR.)

(Remarks by H2 Econs tutor: Since there are contradicting effects on both CA and FA, what do you have to do? Simply weigh the effects, and justify which impact dominates. In the LR, it is likely that BOP worsens because the exports revenue from oil likely to have a large impact on oil-exporting country’s CA and hence BOP.)

Conclusion:
Effects of a sustained increase in the price of oil depends on whether it is an oil importing or oil-exporting countries. For oil-importers, BOP likely to worsen in the SR. However, if country is able to reduce its dependency on oil-imports, it will be able to its deterioration on its BOP in the LR. As for oil exporters, they are likely to experience a favourable BOP in the SR as export revenue and FDI increases. However, in the LR, if oil importing countries are able to reduce their dependency on oil, the fall in demand will worsen the BOP of oil-exporting countries.

Thesis:
SG should be concerned about the effects of a rise in oil price on the economy as it negatively impacts her internal and external economy

A. Internal effects of a rise in price of oil
Examine its impact on (i) Inflation (ii) Unemployment (iii) Growth

As oil is a major factor of production in many manufacturing process, increase in price of oil may result in higher cost of production →AS → cost-push inflation (due to imported-inflation) results (Illustrate using AD-AS diagram: Rising cost of production shifts AS curve from AS1 to AS2 to AS3 pushing prices up to P3) 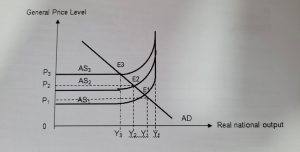 The GPL causes the country’s exports to lose price competitiveness →i quantity ddx. Assuming that demand for exports is price elastic, exports revenue fall. Fall in (X-M)→ AD falls multiple fall in real national income → fall in GDP → Slower growth. Hence may result in increase in unemployment as workers may be laid off due to weaker demand domestically and globally, especially in export-oriented industries.

In the long run, higher oil prices may affect the global economy negatively. This affects economic activity and with pessimistic outlook in the economy, FDI may fall → reducing actual and potential growth further.

B. External effects of a rise in price of oil
Examine external effect on the economy, can look at its effects : (1) BOP, (ii) Exchange rate and foreign reserves

Singapore imports oil not just as a factor of production in the production of goods and services but also refines it and re-exports to other markets.

In the long term, higher oil prices in general, reduce global demand, hence reducing the demand for Singapore’s non-oil exports → revenue of non-oil export →worsens the deteriorating CA even further As explained in (a), rise in price of oil fall in FDI worsening of KFA. Hence, in the LR, CA and KFA worsens, worsening the country’s BOP

(2) Effects on exchange rate and foreign reserves
Deterioration of BOP→ more outflows than inflows of currency -> fall in the external value of the Singapore dollar (S$). S’pore adopts a managed float exchange rate regime. If the exchange rate falls below the lower limit of the band, govt. Intervenes by dipping into reserves → fall in foreign reserves.

Anti-Thesis:
Singapore should not be concerned about the effect on a rise in oil

Government uses modest and gradual appreciation of S$ to moderate imported inflation Rise in price of oil force firms to innovate and increase efficiency so as to prevent excessive increase in COP e.g. via more efficient methods of production, increase labour productivity etc.

If the oil price shock is not persistent, the effects on the economy both internally and externally would also not be persistent and hence less of a concern. Also if the size of the shock is small, BOP deficit and effects of higher oil prices on the internal economy can be corrected. E.g. Singapore had previously been running BOP surpluses, it would have enough foreign reserves to prop correct the BOP deficit. In addition, if prices are too high, or growth slows down, with accumulated budget surplus throughout the years, the govt. can implement appropriate demand management like contractionary FP or MP or supply side policies to mitigate the effects of inflation and slow growth .

In the LR, if the government can decrease the country’s dependence on oil through the promotion of energy saving or green policies, the effect of oil price shocks would be reduced and less of a concern for the country.

Evaluation:
Consider the magnitude of rise in oil price, sources of increases in price of oil, etc.
(More of such evaluation techniques for essays in our Accelerated H2 Econs revision lessons.)

Conclusion:
As seen above, the rise in price of oil has negative impacts on both S’pore’s internal and external economy. Whether Singapore will be concerned about the rise in price of crude oil depends a lot on the extent of the impact on both its internal and external stability the govt. This in turn depends on the magnitude and persistence of the oil price shock. If it is small and temporary, it will be less of a concern as the govt. may be able to mitigate the effects by tapping on its reserves.

Still struggling to get a grade “B” or “A” for H2 Economics? Join me for your accelerated success to A-Level Econs ASAP!