By now, you know that Cambridge examiners like to set harder questions by mixing concepts across topics. In this question, we have the concepts of Price and Cross-Price Elasticities of Demand  with Market Failure, using the former concepts to determine the effectiveness of a latter policy. The following essay question illustrates the combined analysis of both concepts.

Question (Modified from past year JC Prelim exam question)
*Certificate of Entitlement (COE) supply for the fiscal year starting April 2021 will be cut by more than 6% per cent. A smaller COE quota will mean a smaller supply of new cars and a lower overall sales of cars. At the same time, the recessionary impact from the COVID-19 health crisis still lingers throughout the first two quarters of 2021. Also, the SMRT corporation has decided to reduce bus and train fares and to increase the number of train trips given the severe COVID-induced economic crisis.

(a) Using a diagram, explain how a recession and a fall in the supply of COEs will affect the market for new cars. [10]
(b) Discuss the relative significance of the concepts of price elasticity of demand (PED) and cross elasticity of demand (CED or XED) in explaining the decisions made by the public transport operator SMRT. [15]

Introduction
A recession is characterised by a sustained fall in national income across economies of countries around the world. This in turn would lead to a fall in demand for Singapore’s exports, thus causing the national income of Singapore to fall. This will lead to Singaporean’s income to fall, which reduces consumers’ purchasing power.

Certificate of Entitlement (COE) is a form of vehicle quota that serves to limit the number of cars that could be put onto the roads. The COE is obtained through a bidding process and a reduction in supply of COE will likely lead to a rise in the cost of obtaining a COE. As new cars are predominantly sold with the COE already obtained by the new car retailers, the supply of new cars in the market will be reduced. This translates to a shift of the supply curve to the left, as illustrated in the Figure 1. 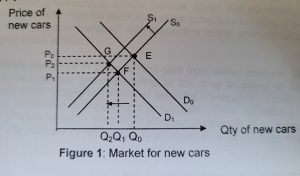 It is also possible that the reduction in supply outweigh the drop in demand for new cars. (Sketch the diagram as an exercise.) This is possible when we consider the COE price as a large proportion of the overall cost of a car.

3. Some inaccuracies in using elasticity concepts in the explanation of the demand side effect – YED is i relevant, PED is not.

4. Most answers were unable to recognize the quota system restricts the maximum possible quantity supplied of new cars.

Introduction
The concepts of price elasticity of demand (PED) and cross elasticity of demand (XED) are useful to profit maximising firms in helping them determine price and output decisions that would help to raise total revenue, given that total cost remains unchanged. We can assume that SMRT seeks to profit maximise, as per what any private firms will choose to do. However, the government might influence decisions made by SMRT, in view of the current economic crisis faced by the country.

PED (price elasticity of demand) measures the degree of responsiveness of quantity demanded of a good to a change in its price, ceteris paribus. It is predominantly influenced by the availability of substitutes in the market and the proportion of income spent on the good/service.

In view of the current recession, the economy is likely facing lower national income level and higher rate of unemployment. As commuters who are currently using public transport daily are likely to deem public transport as a necessity, demand for public transport is likely to be price inelastic. This is coupled with the fact that they will have to spend a relatively larger proportion of their income if they use other forms of transportation such as taxi and private cars. Thus, in this case, the PED is irrelevant in explaining the decision of SMRT to reduce bus and train fares as the resulting total revenue earned will be lower than before.

However, the demand for public transport by potential consumers of public transport is likely to be price elastic. The impact of the recession will likely make public transport a closer substitute to the otherwise more expensive modes of transport i.e. taxi and private cars. More car owners may be willing to consider public transport as an alternative mode of transport and switch to public transport instead. In addition, demand for bus and train rides provided by SMRT may be price elastic due to the presence of other substitutes such as bus/train rides provided by private bus companies or rival company SBS Transit as well as taxi rides. Thus, the reduction in train and bus fares will result in a more than proportionate increase in quantity demanded for SMRT’s services. The revenue gained from the increase in quantity demanded will outweigh the revenue loss from the decrease in price. As such, PED can be relevant in explaining SMRT’s decision to reduce bus and train fares.

However, net total revenue earned might or might not increase as it depends on the extent of impact of the respective sub-consumer market for public transport. Thus the concept of PED is limited in explaining SMRT’s decision to reduce prices for the purpose of profit maximization.

XED (cross elasticity of demand) measures the degree of responsiveness of quantity demanded of a good/service to a change in price of another good/service, ceteris paribus. Given that purchasing a new car for the purpose of transportation can be seen as a close substitute to taking a bus or riding the train, the XED value of public transport with respective to the alternatives are likely to be positive and highly cross elastic.

In response to the likely decrease in price of new cars from earlier analysis, SMRT might be exhibiting rival consciousness and responding to the drop in prices of new cars by reducing bus and train fares, to prevent a loss of potential commuters. Furthermore, with the reduction in COE, ownership of private cars is reduced. Thus, consumers might seek out alternative form of transportation, thus XED concept is relevant in explaining SMRT’s decision to increase the number of train trips in anticipation of an increase in demand for bus and train rides.

However, the concept of elasticities might not be the sole reference in explaining the price and output decision taken by SMRT. As the information is merely estimates, the sample group might not necessary represent the general consensus of the population of different group of consumers. Furthermore, the data might not be as relevant and accurate given the time it takes for the data to be collected compiled and analysed. On top of that, the condition of ceteris paribus is likely to hold true in reality, given that changes in taste and preferences of the consumers are dynamic in nature. Thus, the concepts of PED and XED may be limited in explaining SMRT’s decisions.
(These evaluative points aren’t the strongest though.)

Extra EV points: The aim of SMRT is likely to be maximising social welfare. In an indirect way, SMRT aims to reduce congestion – negative externality in consumption – a form of market failure, whereby there is a divergence between private and social costs. Such a non-profit firm wishes to encourage less ownership and usage of private care, and switch to viable alternatives (aka substitutes in demand). This may be effective for consumers, but not so for producers, especially if transport of bulky goods are required to fulfil business purposes.

It also depends on the actual amount of reduction of public transport fares, whether it is significant enough to induce the switch from private cars to MRT train rides. However, the frequency of train rides would be definitely attractive to MRT users, as it does mean more time savings and convenience.

In conclusion, both elasticity concepts could be relevant to a certain extent in explaining SMRT’s decisions. However, the concept of income elasticity of demand might be more relevant in explaining the output decision of SMRT, in view of the current recession and the drop in national income. Moreover, the decisions made by SMRT could be mainly influenced by government’s motivation to ensure that the welfare of its people is protected in times of the economic crisis. It is likely that governmental intervention in price and output decision outweighs that of the private firm’s profit maximization objective in view of the recession the country is currently facing.

Remarks by JC Econs tutor specialist:
1. Most answers were able to explain the application of PED and XED in SMRT’s decision marking i process. However, justification for their relevance was not convincing enough. These answers were awarded L2 credit.

2. Some answers were able to clearly justify the relevance or irrelevance of the elasticity concepts in the 1 decision making process of SMRT, with consistent reference to the context of the question. These i answers were awarded L3 credit.

3. Some answers instead, analysed how SMRT could use the elasticity concepts in making pricing and marketing decisions. Even at this stage, many answers did not provide a completely accurate definition of the respective concepts. In these answers, there are likely to be some conceptual errors. A number of answers provided mainly one-sided analysis, without considering the limitations of the  elasticity concepts in explaining the decisions made by SMRT.