Out of 3 essays for your H2 Econs exams, the essay on Market Failure topic is your best bet!. Be it on the topic of market imperfections such as factor immobility, or on dominance, or even obscure externalities, you must prepare to the fullest, so that you will be able to conquer it and secure your Level 3 answer.

Otherwise, you might have to settle for questions on market structures or elasticity concepts  for your Cambridge “A” Levels for H2 Economics Section A paper.

Question
Recent sustained trends of economic growth and globalisation have brought about both opportunities and challenges to Singapore. Service-related industries, which require skilled labour, saw healthy growth, while secondary industries, which employ unskilled labour, were lagging behind and faced with very fierce competition from the ASEAN region. Some have called for the S’pore government to implement minimum wage to address the income inequality between these two groups

(a) Using demand and supply analysis, explain the main cause of income inequality between the skilled and unskilled labour in Singapore.

(b) Evaluate the effectiveness of implementing a minimum wage policy to address the problem income inequality in Singapore.

Note: Our closest version of minimum wage in SG is the Progressive Wage Model.  As of writing, applies to only sectors of cleaning, security and landscape.

1. Definition: Income inequality refers to unequal distribution of income and may be caused by differences in earned income – wages during employment and unearned income-income received from their assets (e.g. savings & shares).

3. Demand for labour refers to the quantities of labour services that firms are willing and able to buy at various prices per period of time, ceteris paribus. The higher the wage rate, the lower the quantity demanded of labour, ceteris paribus. The demand for labour is a derived demand, i.e. firms only demand labour services because of the actual goods and services they help to produce.

Analysis: Elaborate how differences in DD & SS could explain the income gap between skilled and unskilled workers, including impact of economic growth and globalisation

Skilled Workers:
Skilled workers earn higher income due to high DD relative to SS for their services. High DD for skilled workers due to:

1. High productivity of labour – a result of high level of training and educational qualifications. Skilled labour is more productive than unskilled worker, meaning to say given the same amount of resources and time, output is naturally more translate to a high demand for such labour.

2. High demand for final product produced by skilled labour since demand for labour is a derived demand. Globalisation and economic growth in Singapore in the direction of knowledge based economy → growth in service-related industries that requires skilled labour → drives up dd for skilled lab, contributing to the high dd in services industry. Low SS of skilled labour relative to dd as acquisition of specialized and technical skills is more demanding.
(similar to labour occupational immobility)

1. Low productivity of labour – a result of low level of training and educational qualifications → translate to a low demand for such labour.

3. Globalisation intensify competition from region demand of local unskilled labour might even fall as employers turn to foreign labour whom are relatively cheaper and easily available.

High SS of unskilled labour due to ease acquiring general skills and influx of foreign workers from the region due to globalisation which reduces labour mobility. A combination of high demand (Ds) and low supply (SS) of labour in the skilled labour market (2 diagrams would be apt, but not essential) would naturally fetched higher income for this group of workers while in the unskilled labour market, the lower income level of is attributed to the low demand (Du) and high supply (Su), accounting for the income inequality in Singapore.
(Note: is this the only way to explain inequity in SG? No.)

Conclusion:
Given the presence of a wage gap that is inherent between skilled workers versus those who are unskilled, the phenomenon of globalization and recent economic growth in Singapore has reinforced the widening of the income inequality between the skilled and unskilled workers. As such, some form of government intervention may be justified in order to prevent the standard of living of the unskilled workers from declining.

Essay Rubrics: Application & Analysis
L1: The answer is mostly irrelevant and contains only a few valid points made incidentally in an irrelevant context. OR The answer contains a list of relevant points / some basic correct facts but generally unexplained.

L2: Underdeveloped discussion, lacking either in:

(b) supply of skilled and unskilled labour market) or depth/rigour (insufficient analysis or lack of egs to substantiate; some economic analysis of why there exist a wage gap between different groups of labour)

L3: A well-developed and structured response that explains the unequal income distribution between skilled and unskilled workers, based on sound demand and supply analysis, making reference to impact of economic growth and globalization in SG.

Introduction:
1. Definition: Minimum wage is a price floor imposed by the government in the labour market. It refers to a minimum price that a producer can charge for a good or service legally. In this case, firms/employers are required to pay their employees a wage rate that is above the prevailing market rate (which is regarded as too low compared to other industries/economies).

2. Aim of imposing minimum wage: In the labour market, the aim of a minimum wage is to transfer income from employers to workers so as increase wages and income earned by the unskilled workers. This improves their living standards and prevents exploitation by employers.

Development: Explain and evaluate the effectiveness of imposing minimum wage to reduce income inequality in Singapore 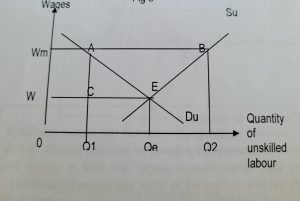 Explanation of  how minimum wage works to address income inequality in S’pore:
For minimum wage to be effective, it must be set above equilibrium. If it is set below equilibrium, the price will rise to equilibrium price, rendering the price floor ineffective. With reference to figure 3 below, in the absence of government intervention, the market equilibrium wage and labour employed are OWe and OQe respectively. If the government decides to fix a minimum wage Wm in the market for unskilled workers, the wage rate paid to the unskilled workers will now increase from OW to OWm. Quantity demanded will fall to 0Q1 and quantity supplied increase to 0Q2.

For 0Q1 workers who are still currently employed after the imposition of the minimum wage, their income increases from OWCQ1 to OWMAQ1, increasing their earned income.

Minimum wage (price controls, particularly price floor) as a form of legislation is considered to be a powerful tool as it is mandatory. It is usually more straightforward to devise, easier to understand by firms and easier to implement. Also, imposing minimum wage can have the effect of raising morale and productivity of the unskilled workers which is beneficial to firms as it translate to lower unit cost of production, increasing profits.

b. Increase unemployment: In addition, it results in a permanent excess supply of Q1Q2 of workers since the wage is not allowed to fall below Wm. The Q1Q2 amount is equivalent to those who are now unemployed due to the minimum wage law. How significant the size of unemployed will be will depend on the value of PED and PES of unskilled labour.

c. PED for unskilled workers is likely to be high. As the skills of the unskilled are largely generic in nature, it is relatively easy to find other resources (such as capital) to substitute. Supply for labor in the unskilled market tends to be more price elastic as workers does not necessary need a prerequisite set of skills or even if relevant skills are needed, such skills could be obtained in a relatively short time. Given the high PES and PED of unskilled workers, the no. of unemployed in the unskilled labour market is largely to be very substantial as represented by Q1Q2 in Fig 3. Income inequality may worsen as a result.

d. Emergence of black market: Some workers will be tempted to sell the service below the legally set minimum wage. This results in the development of a black market for labour. The black market is illegal and counter-productive to the original intention of the minimum wage.

e. Erode work incentives: High wages due to the imposition of minimum wage may cushion low productivity of the low skilled workers. Low skilled workers may feel a lesser need to increase their productivity through education or training courses if their income is being protected by high wages.

Other alternative measures available:
Since the problem with low skilled workers’ low wages is due to the lack of demand of their service which is linked to their productivity, one way which solves the root of the problem is to look at ways to raise their skills and increase their productivity. This may prove more feasible and sustained in the long term. (Note that in this question, not really required to bring in new policies. How should the question phrasing be, to hint that new policies are required?)

a. Raise skills of unskilled workers: Equipping unskilled workers with new skills required in the expanding industries will increase employability of these workers and enable them to earn higher income in these sectors, reducing the income gap. (manpower policy)

b. Increase productivity: Another example of a policy in which the government should look at would be subsidies (e.g. Workfare Training Support Scheme) to encourage low skilled workers to engage in some form of training to increase their productivity and thus increase the demand for their services. This will increase their wages and hence earned income, reducing the gap between the skilled and unskilled workers.

Conclusion:
With rapid rate of economic growth and globalisation in recent years, minimum wage does seem as a convenient and direct way to raise the wages of unskilled workers and hence address the income inequality in Singapore. However, it should be explored with caution and if implemented needs to be complemented by other policies to reduce the ‘side effects’. Moreover, to fully address the income inequality in Singapore, government also need to consider addressing the unequal income distribution from unearned income.

Marking Scheme:
L3: A well-developed and balanced response that considers the success of imposing minimum wage to address income inequality in Singapore, highlighting its strengths and weaknesses with an ability to recognize alternatives to tackle low wages of unskilled workers in Singapore.

L2: An underdeveloped response of how minimum wage law could be effective in addressing income gap but lacking in:

Econs tutor’s comment:
1. For permanent improvements, SSP, aka training of labour, specifically, stepping up efforts to enhance workers’ skills and raising productivity is the only long term solution.

2.For such MF essay question, you should be able to answer any type of failures, including imperfections, divergences, externalities, dominance, etc, as long as you have a step by step approach to it. Targeting at least 19 out of 25 marks for your H2 essays for questions on inequity and market imperfections? Join us for your accelerated success to Economics NOW!