Do you know that you can expect Income Inequality & Negative Externalities to appear in your essay questions on Market Failure topic. For pollution, JC Econs students have to pre-empt that it can include even the case of land pollution, water pollution and even noise pollution, especially case studies ( equally true for H1 Econs students)!

Question
China’s rapid market reforms had created a strong middle class and a burgeoning industrial sector. However, many lower income earners, mired in a polluted environment especially in the mining and industrial areas, are left behind economically.

(a) Explain how income inequality and pollution are causes of market failure. [10m]
(b) Discuss the possible measures that the Chinese government could adopt to solve these problems. [15m]

Introduction
• Application: Identify the sources of market failure base on the above statement: the presence of income inequality and negative externalities (due to pollution generated from industrial production).

• Define negative externalities
– Costs borne by third parties who are not directly involved in the production or consumption of a good. Such costs are not taken into account in the price mechanism.

In this case, external costs are generated as a result of pollution from industrial production. Elaborate on why pollution gives rise to market failure. 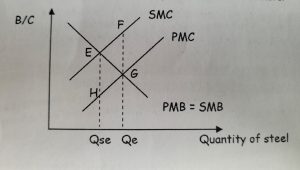 In a free market, producers pursuing their self interest of profit maximisation take into account only their own private costs and benefit. Assume that the production concerned is of steel. The private cost (PMC) will then comprise the cost of labour, raw material and capital equipment for producing steel. On the other hand, PMB to the firms is the revenue they receive from the sale of each unit of steel. In aim of profit maximization, the firms will produce at the level Qe where PMB = PMC.

However, in the course of steel manufacturing, it pollutes the environment a third party or external cost has occurred. The deterioration of the environment and the negative health effects on people (e.g. respiratory problems, asthma attacks) not directly involved in the production of the steel is not taken into account by the price mechanism. It is in this sense that these spill over effects are external to the price mechanism.

A. To tackle pollution:

A1.Taxation
It is adjustable, depending on the magnitude of the EMC.
(Sketch a suitable diagram for this negative externality, to show how the tax will work.

-By taxing firms for polluting, producers may be encouraged to find cleaner ways of producing output. The tax thus acts as an incentive over the long run to reduce pollution: the more a firm can reduce pollution, the more costs it can save. Over time, this incentive will allow firms to internalise the externality.

Limitations/disadvantages:
The main problem of using this method is that there is imperfect knowledge. the damage from pollution is extremely difficult to assess. It is also difficult to apportion blame. For example, the damage to lakes in China has been a major concern. However, just how serious that damage is and what are its monetary costs, are difficult to assess. – An overestimation or underestimation of the size of the external cost would mean either a less than or more than social optimum level of output respectively. – Other problems include the need for manpower to assess the tax. This imposes an additional burden on the government.

A2 Licensing
To control the total amount of pollutant emissions, authorities will devise a license system for emitters of wastewater containing toxic or radioactive materials. Without the license, enterprises will be banned from discharging pollutants into water.

Evaluation: – For smaller firms which are not able to afford the license, they will have to stop production completely. This may lead to retrenchment of the workers in that factory which may lead to additional burden for the government to provide financial aid to these workers. With the firm being out of production, it may also deprive the people in the area of the supply of the good.

A3 Rules and regulation: Penalty/Fines

The government can impose severe penalty such as fines on factories which release toxic chemical wastes into river system. In a way, this will act as deterrence to the producers in contributing to water pollution in China.

Evaluation: – Effective because it is a blunt weapon to discourage water pollution. However, there is no incentive to look for more environmentally-friendly ways to produce the goods. Also, the Chinese government has to employ supervisors to monitor or closely watch pollution emissions from industrial, farming and other sectors. This entails administrative costs. The government has to weigh the costs and benefits to assess the effectiveness and desirability of this measure. If the benefits derived from successful implementation of measure Le. cleaner rivers are greater than the costs incurred in channeling resources towards employing supervisors and conducting monitoring checks, then this measure should be adopted by the government.

State and explain possible policies that the Chinese government can use to reduce income inequality:
(taxes, subsides, etc.)

For example: tax more on the high income group (avoid saying ‘rich’): the personal income tax has to be of a progressive nature. With more income taxed from this group, the government will then redistribute some of the tax revenue to the low-income (avoid saying ‘poor’).

For eg: subsidise more on the low income. Obviously, this is only applicable to the range of essential goods or services, products that are for necessary daily living or even survival. (we are referring to China here, not S’pore economy). Hence, the goods can include rice, oil, public transportation, housing, water, education, healthcare, etc.

What other policies are also applicable here that have not been mentioned?

OVERALL EVALUATION:
Any other judgement on the policy options?

What polices are preferred to be used immediately (short term) vs those of long term?

Apparently, there is no silver bullet, so how does the China Gov decide which of the above range of polices to be implemented?

Finally, what might lead to government failure in this context?
(Any 2 of the above should yield the JC Econs pupil an E2 grade, easily 3 to 5 marks.)

JC Econs Essay High Unemployment & Negative Consequences Model Answers  According to macroeconomic theory, there are 4 main types of unemployment – cyclical, structural, seasonal and frictional unemployment. In reality, these are not measured easily or directly,...

JC Econs Essay Productivity-Driven Growth & Macroeconomic Objectives Model Answers  One of the biggest challenges and concerns for the Singapore government is the lack of appropriate macro econs policies to achieve her macroeconomics goals and objectives.  Due to...

JC Economics Essay COVID-19 Recession & Singapore SOL Model Answers  In 2020, Singapore slumps into a recession, the worst since independence in 1965, with a 41.2% fall in quarterly GDP. Imagine this, despite over S$100 billion into the economy, S'pore still...

JC Econs Essay AD & AS Management Policies and Inflationary Pressure Model Answers  One of the main concerns for the Singapore government is to achieve low inflation, along with a high and sustained growth rate. As clearly stated in the mission statement of...