For the topic of Market Mechanism, the concept of price floor is a common policy implemented by governments around the world, when the free market equilibrium price is too low. The most obvious one is that of a minimum wage,  whereby the government intends to help lower income workers earn more, so as to reduce the income gap, and inequity between high- and low-income consumers. Often times, the Cambridge examiners may want to discriminate between the stronger JC Econs candidates from the relatively weak ones. One way is to set is harder, by combining Microeconomics with Macro Econs.

Here is a simple essay example.

Question
Q48(a) Explain the main types of unemployment in Singapore. [10].

To reduce income inequality, the USA uses a minimum wage law while Singapore chooses to improve the skills of workers as her preferred policy option.
Q48 (b) Discuss whether the above respective approaches are justified. [15]

Suggested Answers: (Part A)
Refer to the following essays for unemployment (unN) types, such as structural unN, cyclical unN (aka demand-deficient unN). Also, a quick revision on the concept of full employment here.

IN USA, minimum wage law can be used to recue / solve income inequality, whereas Singapore believes improving the skills of workers is the best solution. 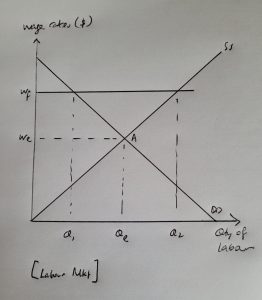 Limitation:
Effects will not be felt immediately as compared to other policies like price controls and as it takes time to train workers

Evaluation of policies: Compare improving the skills of workers to minimum wage laws & assess which is a better solution

In the case of SG, she relies heavily on FDIs and export competitiveness as source of growth min wage laws may not be that effective as it increases COP reducing SG’s attractiveness as a destination for investments by foreign investors. At the same time, higher COP → reduces price competitiveness for exports →with PEDx 1 due to the large availability of substitutes, export revenue is likely to fall. Hence, use of policy like min wage law not suited for a country like SG as it might conflict with its macro goals of growth and employment.
(Explain which is a better solution also depends on the current economic situation, the resources available to the govt as well as the priorities of the govt.)

Consider how other policies that can be used to solve income inequality may be better or may complement the above policies.

Govt. could also give out transfer payments to the low-income group to increase their disposable income → reduce income inequality Govt. could also solving the inequity problem by subsidizing basic necessities like healthcare and education allowing the lower income group to have equal access to basic services → reduce unfair distribution of resources → reducing inequity

Progressive income taxes → The higher the rate of tax, the lower the proportion of disposable income remaining, therefore allowing for more equal distribution of income.
(Qn by Econs Tutor: Is offering alternative policies a good way of judgement?)

More possible evaluative comments:
1. Which is better for short term (ST) and which is more suited for long term (LT)?
2. Price floor can be adjusted for certain industries only. For example?

Conclusion
Minimum wage laws and education and retraining to improve the skills of low skilled workers do improve Income inequality and reduce market failure. Education and training of the low skilled does seem to be a better policy as it tackles the root cause of income inequality. It might be better for SG due to the nature of its economy. Implementing a minimum wage law will conflict with its macroeconomic goal of high and sustained economic growth. For USA, minimum wage laws do seem a better policy than education and training due to the budget deficit that the government. is currently facing.