Public Goods in market failure, is one of most under-estimated topics being tested in exams. JC Econs students thought they know the concepts until they get back their exam scripts…

Question
(a) Explain the term public goods, and decide whether public toilet is an example of a public good. [10]
(b) Discuss how far do you agree with the view that economic activity of the government should be restricted to the provision of public goods within Singapore? [15]

Define public goods: Goods that exhibit the characteristics of non-excludability and non- rivalry.

Apply to toilet: non-excludable but rivalrous in consumption

→ Define equity: distribution of resources in a way that is fair and just.

Thesis: Economic activity of the government should be restricted to the provision of public goods in S’pore

Market failure in the form of missing markets →  A public good has 2 specific characteristics: non-excludability and non-rivalry.

The property of non-excludability give rise to the free rider problem – where it is possible for a person to consume a public good without having to pay for it. From the demand side of the market, the desire to be a free rider weakens the incentive for consumers to offer to pay for public goods-no consumer will reveal his demand for national defence. Since there is no expression of demand, it is impossible to charge a market price for national defence. If such goods were to be left to the private enterprise, they would not be provided at all.

There is a missing market. The market failed because no resources will be allocated to their production. As such, S’pore government needs to intervene to provide the public goods at socially optimal level by financing such expenditure out of taxation.

→Allocative efficiency, Market is able to allocate resources for goods and services efficiently as the amount produced and consumed are what consumers want and valued by society. There is consumer sovereignty in a market economy. This means that producers respond to consumer demands because it is in their best interests to do so. Changes in the goods market will be reflected in the factor markets. In the absence of market failure, the market economy operating in competitive markets will result in allocative efficiency which means that the economy is producing the right amount of the right goods where MSB = MPB = MPB = MSC. The society values last unit of the good produced in the market as equal to the cost of producing that last unit in the market.

Productive efficiency is achieved as producers compete with each other ensuring that the cost incurred is the lowest possible. In the markets. producers are in competition with each other for the spending votes of the consumers. Consumers will buy from producers which offer the lowest price. So producers must produce at lowest cost if they are to survive in the market in long run. Firms will then adopt the least cost of production.

Anti-thesis: Economic activity of the government should NOT be restricted to the provision of public goods in S’pore.

Other forms of market failure that requires government intervention

Inefficiencies also arise in markets of goods and services because of existence of externalities and information failure. In such instance, usually the government needs to take actions and provide a non-market mechanism to allocate scarce resources to improve society’s welfare.

Negative externality:
An externality is a cost or benefit that affects someone not directly involved in the production or consumption of a good, and which occurs without compensation. They are sometimes referred to as third party effects. External cost or negative externality refers to the cost of production or consumption borne by people other than the producers or consumers. Traffic congestion during peak hours is an example of external cost in production. This is because beyond a certain number of car trips, the social cost is greater than the private cost of each additional car trip. The private costs of a car journey include petrol, wear and tear on the vehicle, tolls, the time taken to travel, etc.

As more vehicles enter a stretch of road, all vehicles must travel at a slower rate such that the costs of a car journey in terms of private cost rises. The external costs arise from the opportunity costs of time spent in congested traffic and are imposed by the drivers on one another. Beyond OFO level of
road usage, MSC increases faster than MPC. Define MSC & MPC. 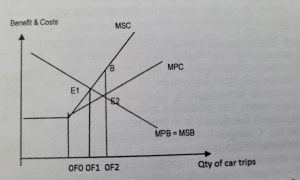 As such, government needs to intervene in the market for car trips to reduce the number of car trips towards socially optimal. They can do so by imposing taxes equal to the amount of marginal external cost (e.g. Electronic road pricing) or through legislations such as and other policies such as increasing quality of public transport system.

Demerit good:
Demerit goods are goods that the government believes consumers will consume too much if provided by the market because of information failure and negative externalities in consumption. Examples of demerit goods include cigarettes and alcohol.

In the case of cigarettes, smokers may not be fully informed of the health risks of smoking or may underestimate the chances of being affected by smoking-related illnesses. Because they do not fully appreciate the harmful effects (information failure) of such goods, they will tend to overconsume the product. Moreover, demerit goods also exhibit external costs in consumption. For e.g. smoking increases the health problems of passive smokers and since private consumers do not take into account of these external cost on society in their consumption decisions, MSB < MPB. These goods are hence overconsumed.

Figure 2 below illustrates the problem of a demerit good such as cigarettes. If the consumers are aware of the true harm of the cigarettes themselves, the ‘correct’ level of demand, would be lower at D2. This would lead to a level of production and consumption of OQ2, the socially efficient quantity of the good.

The lack of information about how ‘bad’ cigarettes are, result individuals ‘over-valuing’ the product. Demand registered cigarettes is at a higher level of D, in the market. This leads to level of production and consumption of OQ₁. This is above socially efficient output level, OQ2 and the market has failed allocate resources efficiently.

There is an overproduction and overconsumption of Q₁Q₂ of the good which results in a deadweight loss equal to the area E₂BE₁.
(Sketch the diagram, according the above diagram analysis given above., as an exercise)

As such, government needs to intervene in the market for cigarettes to reduce the consumption of cigarettes towards socially optimal. They can do so by imposing taxes equal to the amount of marginal external cost (tobacco tax) or through legislations (ban on smoking in public areas) and other policies anti-smoking campaigns.

Explain how the govt implemented expansionary fiscal policies to cushion the adverse effects of the global financial crisis – to cushion the fall in economic growth and unemployment.

EV:
limitation of direct provision of public goods.
any reinforcement of pursing one objective and achieving another as well.
(More of this evaluation techniques in our JC Econs tuition classes.)

Conclusion:
In summary, government activity should not just be restricted to public goods in S’pore as the free market may not be the most efficient way to allocate resources in all markets due to various forms of market failure. However, one needs to be cautious of the threat of government failure as it is not guaranteed that government would be able to improve the situation. Sometimes, it may even worsen it.

In markets where market failure does not exist, the government firmly believes in the free play of market forces to maximize incentives of both consumers and producers and restrict their role to establishing a conducive environment for market forces to operate.

Remarks from JC Econs tutor:
1. Govt intervention at the macro level to manage the economy in this qn is not really that crucial.
2. GO for a variety of rationales, will see you do one, and secure Level 3 answers.

Lacking higher order thinking skills of Application, Analysis and Evaluation? Join our JC Econs class and let our Econ tutor guide you through the core exam skills & techniques to securing your grade “A” NOW!