Furthermore, Monopoly and its impacts on society is also relevant to Market Dominance, which means it can be combined with other forms of Market Failure, including externalities, market imperfections, public goods, etc. Hence, let’s master some content right now, as well as build your exam skills and techniques!

Question
(a) Explain the possible reasons for a market to have a monopoly.
(b) Discuss whether the conduct of a monopoly is inevitably harmful to society. [15]

Monopoly has high barriers to entry. These are restrictions or obstacles that prevent the entry of new firms into the industry. The barriers can be in the forms of natural and non-natural, such as economic, institutional or artificial, technological or legal.

Industries that are capital intensive usually create a natural monopoly. Due to the extremely high set up costs, new firms find it hard to set up new operations. Public utilities industries such as gas, water and electricity require a large amount of investment to start production and very few firms are able to enter such industry. Moreover, due to the reputation, technical and marketing superiority of the existing monopoly, new firms will find it hard to establish its reputation and network and to compete. Thus, natural monopoly exists in such industries. 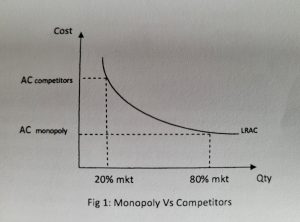 Natural monopoly also exists when only one firm can enjoy the significant economies of scales, hence the market can only support one firm. A single firm, like SPH can supply the entire Singapore’s newspapers at a lowest average costs possible. New firms will find it hard to compete with much smaller market shares. As shown in the diagram above, a monopoly will produce at Qm which is probably 80% of the total market share and the new entrance can only manage 20%, and such even if the new competitor have the same cost structure, it will face a much higher LRAC, making it impossible to compete.

Exclusive ownership and control of resources can also resulted in monopoly. Other firms cannot enter into the industry as they do not have the resources to do so. For example, DeBeers, a monopoly in raw diamonds in South Africa which controls all the supply, making it impossible for competitors to enter into the industry. (Another eg is rare earth elements of which China is a monopoly of, about 90% of global supply.)

On top of natural barriers, government policies and regulations can also create monopoly in various industries. For example, government may issue only one license for certain industries, resulted in monopoly. For example, license to operate public transport system and local TV station. Patents, copyrights, franchises and trademarks are forms of barriers to entry into certain markets. For instance, Microsoft is able to maintain its monopoly power over so many years because of the patents it obtained.

In current context, technology advancement has removed certain natural barriers to entry in some industries. For example, the development of syntactic rubber has reduced the monopoly power of countries controlled the supply of raw rubber. Governments on one hand, have also removing barriers to many industries, such as the telecommunications industry in many countries, for greater competitions. Patents of new inventions have also been shorten to encourage greater competition amongst firms.

Discuss whether the conduct of a monopoly is necessarily harmful to society. [15]

Thesis:
Applications required: Impacts on society in terms of consumers, firms (monopoly and others) and efficiency.

Support the view that monopoly is “harmful”, give example like Singtel has monopoly power on EPL Channel….. SISTEC charges high administrative fees…..

Antithesis:
However, monopoly can also be good:

2. If monopoly power come from ability to innovate, then consumers will benefit (e.g. Microsoft, Apple etc)

3. Price discrimination allows monopoly to provide services/sell goods at lower prices to consumers who might not be able to purchase the goods/services initially (e.g. public transport)( Note that this is a weaker argument. Why?)

4. Regulated monopoly may achieve AE through MC pricing (however monopoly may surfer losses, thus AC pricing is usually used though no AE)

Evaluation
Judgments: depends on objectives of the monopoly, roles of government and nature of monopoly power.

Econs tutor comments:
To show the monopoly and its harmful impacts, any diagram(s) can be used here?