How many of you realise that , for all the types of market failure, Positive & Negative Externalities appear the most frequently in your essay exam questions, for this topic of Market Failure.. The range of externality types are almost limitless, for example, pollution (including air, land, water and even noise pollution), congestion, healthcare, education, e-scooter riding, etc, especially case studies (equally true for H1 Econs students).

Suggested Answer:
Intro: List characteristics of free market economy; Briefly state how free market system solves the problem of what, how produce (working of price mechanism) & for whom to produce

Explain the concept of economic efficiency – Productive and allocative efficiency

Body:
(i) Market for museum visits – generates positive externality in some countries.

Define MPB and provide egs in the market for museum visits – satisfaction derived patrons, more knowledgeable about historical and arts issues etc. Define externality benefit and explain how museum visits generates externality benefits on 3rd parties – Creates a well-educated and cultured society improvement of the well being of its society, promotes tourism, part of education, safekeeping of national artifacts and preservation of national heritage.

Some H2 Econs students may consider museums to be quasi-public good-market may not supply at all since there is no profitability. Explain why museum is a quasi public good-excludable and non-rivalry in consumption. Define excludability and non-rivalry. Since visits to museum is non-rival, MC for additional visitor=0 ➜ market price is zero. In addition, there is huge outlay incurred + regular maintenance cost → not profitable for private enterprise to undertake. Hence, even if demand were to increase, no resources will be allocated to the production. thus, inefficient allocation of resources.

The above is is not highly recommended, especially not in the context of Singapore. In S’pore, entry to museums are actually free. The National Heritage Board lets all citizens and even PRs to visit museums and galleries for free. So in the case of SG, does it become non-excludable and non-rival? It does not. In fact, it remains at best, a semi public good, namely, non-excludable but rival in consumption.

Yet, in some economies, museum visits can be left to free market. Why? one likely reasons is that the external benefit generated by museums may be insignificant or negligible such that MPB equals or tend towards MSB. E.g. relatively young countries with unestablished history, low tourism receipts etc. In these countries, can leave it to the free market to allocate scarce resources efficiently in the market for museum. Explain how price mechanism (demand and supply forces), which achieves equilibrium price and output in at D=MPB=MSB-SS-MPC=MSC, results in allocative and productive efficiency. Highlight the maximum society’s welfare (= consumer surplus + producer surplus).

More on this application of market failure in our Econs tuition lessons.) 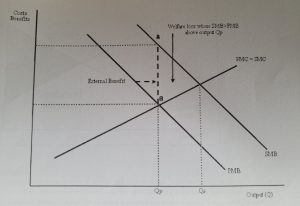 (Econs tutor’s remarks:: Other sources of market failure present in the market for air-travel include market dominance or oligopolistic market structure, but cannot include income inequality. Why?) 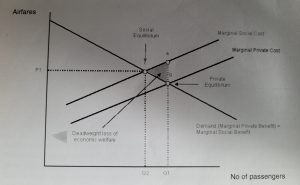 Conclusion:
Free market more capable of allocating scarce resources in the market for museum visits than air -travel–> Government intervention is more justifiable in market for air travel than museums. However, despite the fact the air-travel generates significant negative externalities, government may still leave it to the free market to allocate resources due to air-travel being a strategic industry-national carrier at stake. Intervention to reduce EXT cost may erode its competitiveness against other foreign carriers, threatening its survival.

In the case of museum visits, sometimes government intervention could aid in boosting the external benefits generated which weakens ability of market forces in achieving efficiency.
(Note: this conclusion is excessively long actually. How long should the conclusion be a typical part-a essay question?)

Intro:
The price mechanism is the free market, subject to forces of DD and SS.

Thesis
Price mechanism is the best way to allocate resources because it is efficient.

Identify and explain the criteria that may be used to assess whether the price mechanism is the best way of allocating resources – Economic efficiency, namely, both productive efficiency (PE) and allocative efficiency (AE): AE (P = MC), and Productive efficiency or PE (Output is produced at least cost possible, output produced is at min LRAC). When MSB = MSC, social welfare is maximised.

Productive efficiency refers to the production of any particular bundle of goods and services in the least costly way. It is achieved only when every firm in the economy is producing at the lowest point on the lowest possible average cost curve and when there is full employment of all resources in the economy. Allocative efficiency refers to the production of that particular bundle of goods and services most wanted by society. It is achieved when every market in the economy produces an output where marginal social benefit (MSB) equals marginal social cost (MSC). The price mechanism may be considered as the best mechanism for allocating resources because it will lead to both allocative efficiency and productive efficiency

Explain how the price mechanism may lead to efficient allocation of resources. In the absence of externalities, a competitive market economy will lead to efficient allocation of resources the long run. In the long run, the market equilibrium output of each market is described as allocatively efficient. The desire to make profit will ensure that firms produce those products that are most desired by consumers. Only by doing this will they be able to earn significant revenue and hence profits If a firm fails to produce those products that consumers demand, it will lose its customers to other firms that do so, threatening their survival.

Hence, the market equilibrium output coincides with the socially efficient output which occurs where MPB = MSB equal MPC = MSC. At socially efficient output, the sum of consumer and producer surplus in each market is maximized, resulting in maximum welfare in each market. Furthermore, in the long run every firm in each competitive market in the economy is productively efficient This is because every firm is producing at the minimum point of the LRAC. That is, every firm is using the least cost plant at capacity.

The virtue of the free market can be seen as the incentive given by the possibility of earning profits. This will drive firms to seek the lowest possible cost techniques of production. Profit can only be maximised if costs are keep at their lowest possible. > Given the threat of bankruptcy, a firm in the competitive market will have no choice but to produce at the lowest possible cost because its competitors will do so. A failure to achieve cost minimisation will reflect the inability to compete with the others.

Anti thesis
The price mechanism may lead to inefficient allocation because of the existence of externalities, market imperfections (monopolies, imperfect information and missing markets.

Even though the price mechanism may lead to efficient allocation of resources, it may not be the best because it is inequitable. In the real world, the price mechanism may not be the best way of allocating resources in the economy because income may not be equitably distributed in the economy. Equity refers to the fairness in the distribution of or goods and services or (income and wealth). One person’s judgment of what is “fair” or “equitable” is not necessarily the same as another person’s view. This is “normative” economics: there is value judgment to be made as to what is considered to be “fair”.

Conclusion: Unlike part-a’s conclusion,. you need to arrive at a reasoned judgement on the validity of the question.
Sample: As shown above, in the real world the market mechanism may not be the best way of allocating resources. The govt. may have to intervene in the economy to supplement and complement the price system so that resources are more efficiently and equitably allocated.

Lacking skills on policy evaluation. Join our JC Economics class and let our Economics tutor guide you through the vital step-by-step approach to securing your distinction grade ASAP!