A sample question on the main macroeconomic goal of negative economic growth, specifically recession, depression, and its application to macro econ performance. In addition, we explore the various policy options for the Singapore economy, when she faces a recession, due to global crisis such as COVID-19 health crisis, US Subprime mortgage crisis, Asian Financial crises, etc.

Question
Singapore recorded its worst full-year recession since independence. are reassessing her use of fiscal policy (FP) in order to stimulate SG to recover from recent worldwide recession in 2020.
Source: MTI

(a) Explain the policy of FP and whether it is effective to the Singapore economy. [10]
(b) Critically examine alternative policy options in managing the S’pore economy when faced with a worldwide recession. [15]

Part A:
Fiscal policy refers to the use of government spending and taxation to achieve macroeconomic economic goals such as steady and sustained growth, law and stable inflation, full employment & and a healthy balance of payments (BOP). S’pore’s economy is characterised by a small domestic market duet, her small population size. It depends on exports as its main driver of growth and this consists of about 75°% of the total demand in the economy. Singapore has very high levels of imports due to hers mall size and chronic lack of natural resources and raw materials.

The multiplier (k) refers to the number of times the national income changes I as a result of a change in aggregate expenditure. It has an inverse relationship with the MPW (marginal propensity. where K = MPW = MPS + MPT+MPM (where MPS = to withdraw), marginal propensity to save; MRT= marginal rate of taxation; MPM=  marginal propensity to import) – SG has a small I due to her high propensity to import and save. MPS is the proportion of additional income saved. Mis is high in Singapore because of forced savings (contributions into the Central Provident Fund) and a lack of social safety net. Singaporeans thus save a high proportion of any increase in incomes to add to their retirement funds and for unexpected expenditures. Singe as a percentage of GDP around 95%, meaning that MPS in high, and the size of K is reduced as injections into households and businesses are not fully spent but kept as savings. The high MPS reducer the multiplier value and reduces the effectiveness of Expansionary FP. Given the high MPS value, it is most likely a significant factor in reducing the size of the multiplier, and thus its effectiveness.

MPM in the proportion of additional income sport in imports. For SG, for every $1 spent, $40.31 is spent in imports. As mentioned earlier, S’pore lacks natural resources, causing her to have high levels of import: raw materials, intermediate goods, consumption goods). Also, with the country enjoying quite stable economic growth, national income per capita is high. Citizens will have toe willingness and ability to spend an imports to maintain a high standard of living (SOL) spending a large proportion of additional income on imports. The high moon increases the leakages in the economy, and is the most significant contributor to Singapore’s small multiplier.

MPT is the proportion of income paid as taxes. SG has one of the law of tax rates in the world – Goods and Services Tax (GST) as at 7% and corporate income tax at 17%. This increases the value of the multiplier and thus the bus #4F and declining MPT is not responsible for reducing the effectiveness of Singapore’s FP. Since k= 1/MPW, where MPW = MPS + MPT+MPM, a high MPS and MPM result in a small multiplier where the change of in national income due to changes in autonomous expenditure will be small.. A larger fiscal stimulus is required ted to greatly increase national income. This the effectiveness & EFP as a fail to stimulate the economy is reduced.

Lastly, the effect of cutting tax in fiscal policy to stimulate the economy is reduced in Singapore because of our small tax base; Only 30% of the working population pays tax and this is exacerbated with 101 a further reduction in tax base (during a recession, some people lose their jobs and do not need to pay taxes). This will thus reduce the effectiveness of EFP in Singapore as a stimulus to her economy in times of recession. Due to the unique features of Singapore’s economy, using fiscal policy to stimulate the economy will not be as effective. The government will have to look into other policies to complement or substitute the fiscal stimulus should it wish to bring the economy out of recession.

This essay response is written by a student under within 45minutes, as a timed practice.
1. What are the strength(s) of the answer?

2. What is lacking, and can be improved?

In the midst of a recession in Singapore, the 2 most pressing problems would be negative economic growth and demand-cyclical unemployment (aka cyclical unN). The alterative places need to be employed to stimulate the economy to increase growth as well as decrease unN. Such alterative policies encompass the expansionary monetary policy (MP) of devaluing the Singapore currency (SGD) and supply side policies.

An expansionary monetary policy (MP) refers to the manipulation of monetary variables such as money supply. interest rates and value of currency.  In Singapore, exchange rate can be depreciated to achieve her economic goals.. The Monetary Authority of Singapore (MAS) can devalue the exchange rate (S$) to promote economic growth when external demand for S’G’s goods and services falls in times of global recession.

MAS laves the paling band within the which the exchange rate of SGD is maintained to allow the SGD were room to depreciate. The SGD could devalue from $5G0 $1.50 /us¢ to 56D $1.80 / us $ the weaker SGD), Singapore’s exports are kept prize competitive since their prices in foreign currency fills. This increases the demand for exports and Her export revenue (in SGD) increase. This increase in X increases AD from AD, to AD₂ (figure 1), bringing about multiple increase in output from y, to Ya, bring about actual growth as seen in the increase in so real national output from Y, to Yo.

Given the increase in AD, firms will increase their employment of factors of production (such as labour) to increase output to meet the Increase in demand and hence dampens cyclical UnN. Given the trade-dependent nature of S’pore, keep its export competitive helps boost AD a lot as the external trade is the country’s main driver of growth. Thus it would be more effective to exchange rate poling to boost the external economy rather than. the policy as suggested, which boosts the domestic economy, assuming that G and C take up a small percentage of GDP. Yet, the increase in price competitiveness of X through through devaluation of SGD may be limited globally given the poor economic conditions globally. Other countries may use protectionist measures to stimulate their economy, and the demand for Singapore outputs. might not increase significantly. Thus, the devaluation of SGD reduces reduces the severity of the recession in SG when used alone it may not bring the economy out of recession.

Supply side policies (SSP) such as wage policies can be employed to manage Singapore’s economy during a global. recession. They are designed to shift AS to the right by increasing the quantity and quality of resources through improving the efficiency of goods and labour market, as well as the productive capacity of the economy and state of technology.

Wage policies refer to limit imposed by laws on increase in wages. The government can reduce employer CPF contribution rates to reduce wage rigidity. During recession, the full in output moons that firms need fewer workers and would resort to retrenchment to cut costs. A flexible wage scheme allows firms to reduce their cop in recession, reducing their inclination to retrench workers to ensure survival of business. 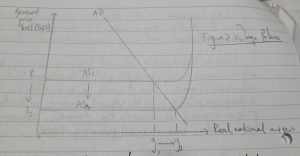 Way, policies are effective and appropriate because it helps to dampen unemployment rates during recession, and works better than fiscal policy as it is not costly in monetary terms and does not put strain a government’s budget. Also, reduction in wages reduces COP, on a shifting AS from AS, to AS₂ (Figure2), increasing output from y, to Ys, resulting in potential growth without inflationary pressures since GIL falls from P₁ to P₂, in the long run. Yet, flexible labour markets may increase income inequality -forced to accept jobs at lower wage rates. Also, a as there wage policies prevent resource prices from fluctuating freely and fully in I in response to changing market conditions, they interfere with the allocative function of the price system, resulting in allocative inefficiency in SG economy, causing welfare losses.

In view of the current worldwide recession, monetary policy and supply-side policies are alternative policies that the government to manage the ever and they may be more a policy due to the nature of economy of S’pore. All in all, a combination of the above policies would enhance their effectiveness. Fiscal policy, though limited due to the nature of SG’s economy, is useful too as they have a strong supply side fours. By increasing government expenditure in education training and reducing corporate tax rates, these fiscal stimuli increases AD in the short-nun (actual growth) and in the long-run, increases AS (potential growth).

Hence, to tackle the recession effectively, the government reeds a good mix of both demand-management and supply-side policies to cushion the impact in the short run as well as in the long run.

This essay response is written by a JC2 Econs student under within 45minutes, as a timed practice.
1. Are both diagrams correct and relevant? What better diagram(s) to sketch?

2. Are you impressed with the evaluation points? Are the judgement relevant and accurate to the Singapore economy?

3. What improvements can you suggest?

4. How many marks would you give this entire answer?