Being one of the most prevalent forms of market failure in the world, you are expected to be thoroughly familiar for the context of tobacco smoking, as a form of negative externality in consumption. As of writing, either pre-or post- COVID -19, more government around the world are contemplating tighter controls on smoking so as to curb the harms of passive smoking.

For example: the Food and Drug Administration (FDA) in USA explores the ban on all menthol cigarettes and flavoured cigars. Also, the Who Health Organization (WHO) suggests that governments should ban tobacco and e-cigarettes in public places, post-COVID-19. Finally, Asian plans to ban e-cigarettes.

(a) Explain the concepts of demerit goods and negative externalities and how market fails in each case.
(b) Discuss whether a policy of a “total tobacco ban” Is the best policy to reduce market failure due to smoking.

Demerit Good: A good or service whose consumption is considered socially undesirable (unhealthy, degrading, etc) due to the perceived negative effects on the consumers themselves.

Misallocation of resources as there is an over-consumption of cigarettes: Qp> Qs

Price mechanism has failed to allocate resources efficiently as equilibrium price does not fully reflect the true private costs and benefits of consumption: • Pp < Ps

Negative Externalities
A negative impact on any party not directly involved in an economic decision Negative externality occurs when an economic activity causes external costs to third party stakeholders who cannot directly affect an economic transaction Examples: Smokers lighting up a cigarette and “consuming” the cigarette resulting in external costs (cancer, bronchitis, et cetera) on the third party (passive smokers or second hand smoke). The presence of negative externalities implies that marginal external costs (MEC) are impose on third parties Imposition of EMC on third parties will cause the marginal social cost (MSC) to be higher than the marginal private cost (MPC) 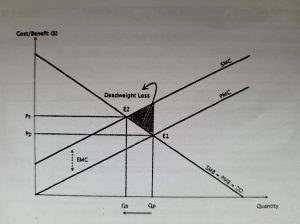 MSC= MPC+ MEC
MSC> MPC
Reflects the MEC (in this case the adverse health effects forced upon the second-hand smokers) imposed on society.

MPB = MPC
Overconsumption and overproduction (Qp> Q₂)
Lower than socially optimal prices (Pp < Ps)
Reflects the fact that MEC is not internalised by the private agents.

Deadweight loss imposed on society
Between Qp and Qs: MSC > MSB
Each unit transacted adds more costs to society than benefits, thus giving rise to a deadweight loss (shaded area). This area shows that society’s total welfare is not maximised and there is market failure due to over-consumption

L3: Answer demonstrates in-depth understanding of the two concepts; Good quality of analysis and strong application of diagram; Strong references to the preamble
L2: Explanation of demerit goods and negative externalities with no reference to preamble; Inclusion of diagram with limited application in the explanation
L1: Stating and defining concepts with no attempt to using them to answer the question, and / or no reference to the preamble

Third party external costs: second-hand smoke which may potentially cause cancer, bronchitis, et cetera, which in turns leads to overproduction and overconsumption that will results in a deadweight loss to society. Government should step in to correct the market failure and reduce the deadweight loss imposed on society from the overconsumption and overproduction of cigarettes

Economic Analysis of the Ban
From an efficiency standpoint, a total ban on tobacco only justifiable if and only if the external costs imposed on society is so large that SMB = SMC’ at quantity = 0. If not the ban will result in a socially suboptimal outcome. 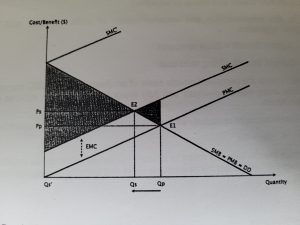 Therefore, a total ban on tobacco is not the best policy when the welfare loss due to the ban is larger than the deadweight loss associated with the negative externality of smoking. In this case, the ban will result in a socially suboptimal outcome.

Area A > Area B: Total ban will result in a net loss to society. Therefore the extent of the resultant deadweight loss incurred from the total ban will relate inversely with the severity of the EMC

Other Impacts of a Total Ban
Emergence of black market: a situation where the price mechanism does not function efficiently which will result in a less than socially optimal outcome

o Inefficiency due to Information imperfection, asymmetric information, significant market power held by the producer (not required to go into detailed analysis)

Ripple effect on industries closely related to the tobacco industry
Complementarities of goods and services: Bars, discos and alcohol, and cigarettes

Suggest and compare ban according to the following criteria:

Comparisons can be based on
i) Policy’s impact on allocative efficiency: Which policy will result in a smaller deadweight loss

Recommending and critically analysing any 2 of the following policies:
Taxation on the consumption of cigarettes
Education campaigns & Moral suasion
Allocation of smoke-free zones (no smoking in general public areas)
Age restrictions (this is the most similar to a ban on young and beginner smokers)

Evaluation:
More of this exam technique in our intensive lessons for Econs.

Conclusion:
Ban most likely is too harsh a policy. Curb of smoking is long battle. A combination of a gradual approach of taxation, education campaigns, allocation of smoke-free zones and age restrictions would be more appropriate.

Lacking higher order thinking skills of Application, Analysis and Evaluation? Join our JC Econs class and let our Econ tutor guide you through the core exam skills & techniques to securing your grade “A” NOW!