The price mechanism can perform the role of distributing scarce goods among the different uses or consumers efficiently most of the time. However sometimes, the price mechanism produces undesirable outcomes. (In actual terminology, the market fails – instances involving externalities or public goods.)  Even when the market operates efficiently, there are times when the government may intervene (e.g. redistribution of income).

In this chapter we will merely look at price controls, taxes and subsidies, and how these microeconomic policies work. More details, especially on the various rationales of intervention, when we examine the topic of Market Failure.

Whenever we study policies, we also examine its strengths and weakness. In Micro Econs, one of the limitations is to look the the impact of any policy on social welfare. In order to do that, we first have to learn to small concepts: Consumer and Producer Surplus.

A DD curve shows the price a consumer is willing and able to pay for each unit of the good.

Consumer surplus (CS) is the excess of the price that buyers are willing and able to pay for the good over the actual price paid. This is defined as the extra satisfaction gained by consumers from paying a price that is lower than that which they are prepared to pay. 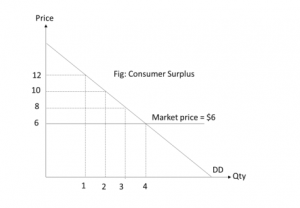 By convention, consumer surplus is approximately represented by the shaded triangle shown in fig. below – i.e. the area under the demand curve and above the equilibrium price. 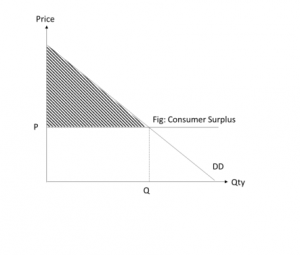 The SS curve shows the price a producer is willing to accept for each unit of the good (based on the costs of production).

Producer surplus is the excess of what a producer is willing and able to put up for sale for a good over the actual price he receives. This is defined as the excess of actual earnings that a producer makes from a given quantity output, over and above the amount the producer would be prepared to accept that output.

Again, producer surplus is approximately represented by the shaded triangle shown in Fig. below, i.e. the area under the equilibrium price and above the supply curve. 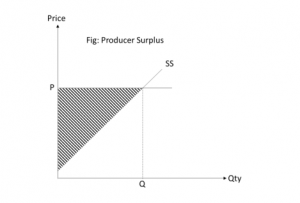 Together, CS and PS represent the approximate amount of social welfare an economy enjoys. More details on it in Chapter 9.

I When the government set price controls, they are artificially imposing a price different from the market clearing price. These controls can take the form of stipulating a maximum price (price ceiling) or fixing a minimum price (price floor) for a good or service.

When the government sets price controls, they usually have the following objectives in mind:
1. To keep the price of the good at a level that is affordable to the consumers. Examples include necessities, basic amenities and rents.

2. To support incomes for producers at a higher level than would be the case at market wages. Examples: agricultural pricing for farmers, income of unskilled workers.

3. To stabilize prices. Government may want to iron out wide fluctuations in price in the interest of consumers and producers.

4. To prevent exploitation by suppliers who may charge a high price in times of shortages, say during war times.

An effective price ceiling is a legally established maximum price below the market equilibrium price.

An example of a price ceiling will be rent control. One clear example is New York City, where rent ceilings have been used since World War II (when they were introduced as a temporary measure). Another eg is in Msia, whereby Covid-19 test kit is set a ceiling price.

Referring to Figure 2, suppose the market of rental houses was initially at equilibrium where
1. Rent: Re.
2. Quantity exchanged: Qe housing units.

After the government imposes a price ceiling Rc,
1. A shortage of (Qd –Qs) arises which may generate a black market.
2. Inefficient allocation of resources since fewer resources will be allocated to production than is actually needed.

In response to the shortage, a black market may result.

(Note: A price ceiling that is set above the market equilibrium has no effect.

An effective price floor is a legally established minimum price above the market equilibrium price.

Another case where a price floor is used is in the labour market. A minimum wage law is a regulation that makes hiring labour below a specific wage illegal.
(related article: S’pore has no minimum wage, but has a Progressive Wage Model, sat Ministry of Manpower)

A major problem with maximum prices is likely to be the emergence of black markets.

A black market is one where sellers ignore the government’s price restrictions and sell illegally at whatever price equates illegal demand and supply. It exists because unsatisfied consumers, unable to buy enough in legal markets, may well be prepared to pay very high prices. The opportunity to make higher profits presents itself if the good is bought at the controlled price and sold at the black market price. 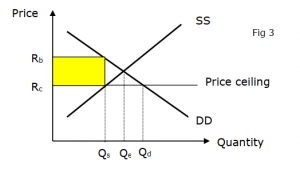 Referring to Figure 3, when a price ceiling, Rc, below the equilibrium price is imposed,
1. Shortage of (Qd-Qs) results
2. If all the available supply, Qs, is sold in the black market, price in the black
market can rise to Rb.
3. Black marketers extra earning receipts is shown by the shaded area in Fig 3.

In reality, not all will risk violating the law, so some, and not all of the product will be sold in black markets.

An example of government intervention in markets is the imposition of indirect taxes on goods. (IMPORTANT!)

2. An ad valorem tax is calculated as a percentage of the sale price of a commodity E.g. 7% GST in Singapore.

(GST in Singapore. Is it a specific or a n ad valorem tax?)

The government actually taxes the supplier for the quantity sold; hence, a tax is perceived to add to the cost of production. As such, it will cause the supply curve. to shift VERTICALLY upwards. Referring to Figure 4, the vertical distance between SS0 and SS1 represents the tax per unit imposed.

(Note: even if in reality, the government imposes the tax directly on consumers, the analytical treatment can still be treated as though it is imposed n producers.)
(Note: A 3rd type type of tax is lump sum tax. This is independent on the price level, quantity, or revenue., hence is a very straight-forward tax.)

But why does the supply curve shift upwards by the amount of the tax? This is illustrated in Figure 4.

To be persuaded to produce the same quantity as before the imposition of the tax (i.e. Q0), firms must now receive a price which allows them to fully recoup the tax they have to pay (i.e. P0 + tax).

1. Consumers pay a higher price and quantity exchanged is lower.
2. There will be a transfer of income from consumers and producers to government.
3. Lesser resources are allocated to the subsidised industries or sectors.

The amount of tax burden (incidence) that producers can shift to consumers depends on the relative price elasticity of demand and supply.
(To be examined in complete details in the next chapter, Concepts of Elasticity)

Here is an example of a consumer bearing more of a tax imposed by the government. In the sketch below, the DD curve is drawn relatively steep, an the SS curves are drawn flatter. Hence, PED value is smaller than that of PES. 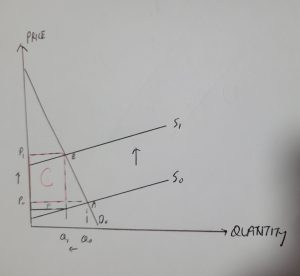 A per unit subsidy is a fixed amount of money given to the producers for each unit they sell.

It lowers the cost of producing a good and shifts the supply curve downwards. Subsidies are often given by governments to agricultural producers.

Referring to Figure 5,
1. A per unit subsidy of $S shifts the supply downwards from SS1 to SS2.
2. Equilibrium quantity increases to Q2 while equilibrium price decreases to P2.

8.3.1 Consequences of a Subsidy

1. Producers’ income is raised.
2. Consumers pay a lower price and quantity exchanged is higher.
3. To the extent that tax revenues are used to finance the subsidy, there will be a transfer of income from taxpayers to the producers.
4. Additional resources are allocated to the subsidised industries or sectors.

(Note: Similar to taxes, JC Economics students are also expected to be able to pre-empt who receives more of a subsidy , when a government offers one in any market.)

However there are limitations for each policy. We will cover more of the relative ineffectiveness and inappropriateness under Gov intervention in Markets 2 (ie Market Failure),

The above questions require your knowledge of the various Micro Economic policies in a market, plus strong examination skills & techniques, especially recognising the ned to apply the latent elasticity concepts. More of such assessment skills in our Econs tuition class.

Prior Chapter: YED & XED (H2 Only) | Next Chapter: Market Efficiency