When the market is longer efficient, one of the obvious issues is that of poor allocation of resources in an market and economy. There are many sources of market failure, including:

1. Divergence between private and social costs or benefits – This includes the case of public goods, merit and demerit goods, as well as externalities.

2. Market Imperfections – This includes the violation of the assumption(s) of the perfectly competitive market, and shows how in each case, market failure can occur. For example, the assumption of many sellers may not hold in the real world. In some markets, there are only one or a few sellers. with each possessing large market share. Considered as dominant firms, it includes both monopolists and the oligopolistically competitive firms.

Under certain circumstances, firms in market economies may fail to produce efficiently. Inefficiency means that scarce resources are not being put to their best use. In economics, the concept of inefficiency can be applied in a number of different situations.

Pareto Inefficiency
Pareto inefficiency is associated with economist Vilfredo Pareto, and occurs when an economy is not operating on the edge of its PPF illustrated by point inside the production possibility curve (PPC) such as point D in the diagram below and is, therefore, not fully exploiting its scarce resources. This means that the economy is producing less than the maximum possible output of goods and services, from its resources. 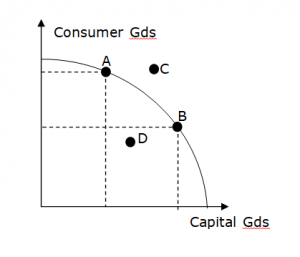 Productive Inefficiency
Productive inefficiency occurs when a firm is not producing at its lowest unit cost. Unit cost is the average cost of production, which is found by dividing total costs of production by the number of units produced. It is possible that in markets where there is little competition, the output of firms will be low, and average costs will be relatively high. This is likely to occur if a few firms, or just one, dominate the market, as in the case of oligopoly and monopoly.

‘X’-inefficiency’ (H2 Only)
This is a concept that was originally associated specifically with management inefficiencies, but can also be applied more widely.

X inefficiency occurs when the output of firms is not the greatest it could be. It is likely to arise when firms operate in highly uncompetitive markets where there is no incentive for managers to maximise output.

Allocative efficiency occurs when the firm’s price, P, equals the extra (marginal) cost of supply, MC. This is efficient because the revenue received is just enough to ensure that all the resources used in the making of a product are sufficiently rewarded to encourage them to continue supplying. Receiving the value of marginal cost – no more and no less – is economically efficient because all factors derive a reward which just keeps them supplying their resource, including a normal profit for the entrepreneur.

More in Chapters on Merit & Demerit Goods, as well as Externalities.

Dynamic Inefficiency (H2 Only)
This type of inefficiency occurs when firms have no incentive to become technologically progressive. This is associated with a lack of innovation, which leads to higher production costs, inferior products, and less choice for consumers.

(Note: There are two ways in which firms can innovate: New production methods and new products. Innovation, research, and development are expensive and risky, so firms will expect a fair level of profits in return. However, because the price mechanism may not generate profits for the supply of public and merit goods, there is often an absence of dynamic efficiency in these markets.)

Social Inefficiency
This occurs when the price mechanism does not take into account all the costs and benefits associated with economic exchange. 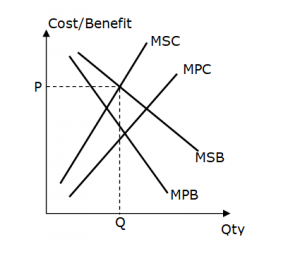 Equity means fairness or evenness, and achieving it is considered to be an economic objective. Despite the general recognition of the desirability of fairness, it is often regarded as too normative a concept given as it is difficult to define and measure.

The opposite of equity is inequity, and this can arise in two main ways:

Inequity of outcome
Inequality of outcome from economic transactions occurs when some individuals gain much more than others from an economic transaction. For example, individuals who sell their labour to a single buyer, a monopsonist, may receive a much lower wage than those who sell their labour to a firm in a very competitive market. Differences in income are an important type of inequality of outcome.
( A monopsonist behaves like a monopoly, but as a single buyer, bot a single seller. Not in 8823 or 9757 Economics Syllabi, but not too difficult to grasp the concept.)

Inequity of opportunity
Inequality of opportunity occurs when individuals are denied access to institutions of education or employment, which limits their ability to benefit from living in a market economy. For example, children from poor homes may be denied access to high quality education, which limits their ability to achieve high levels of income in the future.

When markets are free from imperfections, such as information failure, factor immobility, externalities, etc, resources will be allocated in such a way that efficiency will be achieved. In attempting to achieve equity, governments may intervene and distort the workings of the market so that while equity is gained, efficiency is lost. For example, welfare payments help to narrow the gap between rich and poor, but they may create moral hazard and produce a disincentive effect, so that welfare recipients remain dependent on welfare payments into the long run. This is known as the equity-efficiency trade-off.

Still lacking in exam skills for your essays, and unable to get a grade A ? Join our Econs intensive tuition class.