In this chapter, the Economics concepts and content knowledge correspond to the Syllabi 8823 and 9757, specifically for Theme 1.1 Scarcity as the Central Economic Problem.

Economics is a social science. It is the study of how individuals and societies choose to allocate scarce resources among alternative uses in an attempt to satisfy their unlimited wants.

Another definition offered by Adam Smith (1776):
“…an inquiry into the nature and cause of the wealth of nations.”

The scope of Economics can be broadly classified into two major divisions of economics: microeconomics and macroeconomics.

Macroeconomics concerns the whole economy. For example, it examines the factors that determine the aggregate output, the general price level and the unemployment rate, as well as how a government can make a country richer.
(Note: Most JC cover Micro Econs in JC1 and Macro Econs in JC2)

Positive economics is relatively scientific (testable) and focuses on value-free descriptions of and predictions about economic relationships. Normative economics deals with values and addresses what should be rather than what is.

The root issue in this discipline is that of scarcity. Scarcity refers to the situation where the limited resources available are unable to satisfy the unlimited human wants. Facing this central economic problem of scarcity, it is then necessary for people to choose. With every choice made, there will therefore be a trade-off, known as the opportunity cost.

Wants refer to the desire for ever higher levels of consumption. These desires rise over time. As soon as old wants are satisfied, new wants are instantly created.

1. Land: All natural resources or all productive resources made available to  mankind by nature. Examples include land, sea, air, forests, and mineral deposits.

2. Labour: Any human effort, both mental and physical, used in the production of goods and services.

4. Entrepreneurship: The attitude of risk taking and decision making, that is required to organise the other factors of production.

Because resources are scarce, they have alternative uses. For an entire economy, there are 3 fundamental choices (also termed as the 3 Basic Economic Questions):

1. What and how much to produce
This is a decision on the types of goods to produce as well as how much of each good to produce. It is a problem concerning the allocation of scarce resources among its alternative uses.

How choices are made in answers to the 3 questions above depends on the type of economic system adopted by the country. There are basically three types of systems: free market system, command economy and the mixed economy.
(For A-Level Economics, JC students learn mainly how the market works to answer these 3 Basic Economic Questions.)

Opportunity cost is the cost incurred when a choice is made, and it is expressed as the next best alternative forgone. This represents the real cost of the activity. Such costs may or may not coincide with the money expenditure of the activity. An economic good is scarce in nature; hence, opportunity cost is incurred in providing it. Once a decision is made to use resources in one particular production activity, it will not be available for any other use. There is a cost involved whenever a choice is made – known as opportunity cost.

The problems of scarcity, choice and opportunity cost can be illustrated on a Production Possibility Curve (PPC), or production possibility frontier (PPF).
The PPC shows all the possible attainable combinations of goods or services that can be produced in an economy, when all the available resources are used fully and efficiently, at a given state of technology.

a) The economy only produces 2 goods or services.
b) Production is observed over a specific time period, E.g. One year.
c) The quantity and quality of the resources used remain the same over 1 year.
d) Resources are fully employed and efficiently utilised.
e) The level of technology remains constant 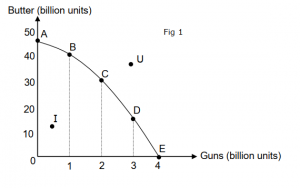 Scarcity: Represented by points in Figure 1 which are outside the PPC (such as U).
Such a combination of goods cannot be achieved given the present amount of resources and the current level of technology. Hence, these combinations are unattainable.

Choice: Points A, B, C D and E on the PPC represent combinations of goods that are attainable but the economy can only have one of these alternative combinations as resources cannot be used to produce all at the same time. A choice will have to be made, and the choice of which combination to produce at would depend on the country’s priority.

Opportunity Cost: The downward sloping nature of the PPC illustrate opportunity cost as to get more of one good, the economy must make do with less of the other good.

Other Concepts:
Points inside the PPC (such as I) are attainable but are inefficient combinations because resources are not fully or efficiently used (i.e. the economy is experiencing unemployment or underemployment). Conversely, all points on the PPC illustrate the concept of efficiency.

The PPC is described as concave to the Origin. In Figure 1, the trade-off increases as we want additional units of cars.

This is known as the Law of Increasing Opportunity Cost: The law states that as more of a particular good is produced, larger and larger quantities of the alternative good must be sacrificed, i.e. the opportunity cost of its production rises. In reality, it is true that opportunity costs increases because resources in the economy are not perfectly homogeneous or equally suited in the production of all goods. Some resources are just better suited for the production of some good than they are for others.

As the production of guns increases, the resources that are increasingly less suitable for car production have to be re-deployed. This leads to more and more units of butter being sacrificed.

In order to reach an attainable point on the PPC, an economy can raise her ability to generate goods and services respectively. An outward shift of the PPC illustrates economic growth. The shift in the PPC will appear parallel if the resource whose availability is altered is perfectly adaptable to the production of both goods (Refer to Figure 2). If the resource is better suited only to the production of 1 good, shift in the PPC will be pivotal (Figure 3)
(Note: It is also possible that the PPC shift inwards. Usually, destruction to the land, capital and even labour, or the occurrences of natural disasters are the root causes.

The main sources of economic growth include:
1. Increase In The Quantity Of Resources
An increase in the total supply of resources will lead to an increase in the ability to produce more goods and services. For E.g.:
a. Labour – Encourage population growth as a larger population would mean a larger potential workforce or encourage greater labour participation by women and retirees.

e. Entrepreneurship – Numerous incentives offered to encourage individuals to start their own business. For example, the Singapore Economic Development Board launched the Start-Up Enterprise Development Scheme (SEEDS) in 2001, to match $1 for $1 in investment/business up to $300,000. There is even a STARTUPSG initiative for aspiring founders in S’pore.

For Start-Ups (Entrepreneurship Incentives)
1. SEEDS
– Provides innovative Singapore based young companies a co-investing financial option for young investors that are independent of up to $1 million in matching capital.

2. TECS (Technology Enterprise Commercialisation Scheme)
– To develop a new brand of technologically innovative global enterprise incentives; TECS aims to catalyse the formation and growth of such start-ups based on strong technological intellectual property and scalable business models. Singapore EDB is providing TECS grants to fund their R&D efforts
towards commercialisation of proprietary technology and ideas. TECS is a competitive grant in which proposals are evaluated based on both technical and commercial merits by a team of reviewers. Only the best projects and or proposals are funded.

3. BAS (Business Angel Scheme)
 Similar to SEEDS, BAS is a simple equity based on co-financing options for SG based early stage infant companies. The intended amount goes by a
dollar to dollar approach. It could most likely match up to $1.5 million in S$.

2. Improvement in the Quality of Resources
a. Labour
i. Improvement in skills of the workforce through higher education and training
ii. Better management and organisation so as to reduce miscommunication and discover the maximum potential of the employees
iii. Reward hard work by giving out incentives such as higher wages, performance bonus and fringe benefits
iv. Better equipment that enhances the productivity of labour

b. Land
i. Application of fertilizers
ii. Implementation of irrigation schemes

c. Capital
i. Technological improvement, such as discovery of new production methods. Such changes are only possible with greater expenditure on research and
development to allow for a higher rate of inventions and innovations.