In this chapter, we begin with the Theory of Demand, for the section of JC Econs Lecture Notes for Theme 2: Markets

In general, the 3 basic economic questions can be answered by either i) the market system, ii) planned economy or iii) the mixed economy. In this 21st century, it is apparent that the mixed economy is the way to go: largely free market forces at work, unless the markets fail significantly. Thus, we first look at how market work on their own (demand and supply theory). Then go on to understand when there is market failure, and with subsequent government intervention in markets.

The price mechanism (aka price theory, market mechanism) is the essence of the free market system. There is an assumption that people are motivated by self-interest and that the “invisible hand” of the market guides this self-interest into promoting general economic well being. There is no government involvement in a free market.  It is the interaction of demand (SS) and supply (SS) forces that determine the prices of the goods and services. The consumers demand finished goods for consumption whereas the producers/firms supply the goods for profits.

Before we can see how buyers (consumers) and sellers (producers) interact in a market, we zoom into Consumer Theory first, ie, how consumers behave.

Demand represents the consumers. Effective demand (DD) is the desire to possess a good or service backed up by the willingness and ability to pay for the good at a given price in a given time period.

It states that there is an inverse relationship between price and quantity demanded, ceteris paribus. That is, when the price of the good rises, its quantity demanded falls, vice versa. (ie, a downward sloping DD curve) 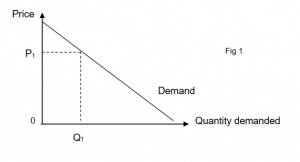 Individual Demand refers to the quantity of a good a consumer would purchase at given prices over a period of time.

Market Demand refers to the quantity of a good that all the consumers in the market would be willing to purchase at given prices over a period of time. It can be derived by the horizontal summation of all the individual consumers’ demand curves.

A demand curve is constructed on the assumption that ‘other things remain equal’ (ceteris paribus). In other words, it is assumed that none of the determinants of demand, other than price, changes. The effect of a change in price is then simply illustrated by a movement along the demand curve, E.g. from point A to point B in Figure 2. This is termed: change in quantity demanded.

On the other hand, the demand for a particular good refers to the entire relation indicating the quantity demanded at each price. It is represented by the whole demand curve. When one of the other determinants changes, we see that, at every single price, the quantity demanded has either increased or decreased. It is illustrated by a shift of the entire demand curve, E.g. from DD to DD1 or DD2 in Figure 3. This is termed: change in demand.

If income rises, the demand for most goods and services will rise. These goods are known as normal goods. Normal goods are goods which consumers will demand more when their income rises.

When people have lower incomes, they are less likely to purchase normal goods like LCD television sets even if the price were to remain the same. This could be because they are less likely to afford these goods. As shown in Figure 3(i), when there is a fall in income, at P, quantity demanded will decrease from Q (on the original demand curve, DD to Q1 (on the new demand curve DD1 where DD has shifted to).

In other words, a fall in income will lead to a decrease in demand for normal goods which is reflected by a leftward shift of demand curve (which is essentially a decrease in quantity demanded at any given price). However, rising income may also cause the demand for some goods to fall. These
goods are called inferior goods. Examples: cheaper basic foodstuffs, basic clothing, canteen food, instant noodles.

If buyers expect market conditions to change in the near future, then they adjust their demand in the present accordingly. For E.g. if people expect cars to be cheaper in the future, then they will save some money by buying them in future, causing the demand for cars to fall in the short term.

2. Complements (in Demand)
Also known as joint demand, some goods are complements in demand, i.e. the use of one requiring the use of the other. There is an inverse relationship between demand of Good X and the price of its complement (Good Y). For instance, if the price of motor cars increases, the demand for petrol is likely to fall, ceteris paribus.

3.5.4 Changes in Tastes and Preferences

Choices in food, clothing, movies, music – indeed, all consumption choices – usually are influenced by consumers’ tastes and preferences. Since tastes and preferences are merely consumers’ likes and dislikes, a change in it can change demand. Consumers usually demand for goods that are fashionable and when the craze is over, the demand will fall. Example: Bubble tea & Gong cha.

Sometimes, a change in tastes and preferences  (T&P) may be related to some particular events, such as Mad Cow Disease and H5N1 Bird flu outbreaks. For example, if health officials warn that milk consumption is linked to heart disease, the demand for milk is likely to fall. Similarly, the demand for milk could increase if the public developed the perception that milk can make people smarter.

Consumers’ taste and preference are also affected by advertising. For eg, a campaign educating the public on the harmful effects of consuming excessive sugar will change the T&P against sugar, lower its DD.

Size, composition, age and sex distribution, culture and religion are some aspects of the population that will affect the demand for the good. For example, an increase in birth rate will shift the demand curve for baby products (E.g. diapers, prams, strollers) to the right.

Hire-purchase financing such as 0% interest free instalments can raise demand for a good significantly, especially consumer durables such as plasma television and refrigerators or “big ticket items” such as houses and cars.

In addition, if the interest rate is high, it would be more expensive to borrow money to buy a good. Hence the demand for the good falls, and vice versa.

In the next chapter, we look at the way producers behave.

It may not be apparent yet. The above questions require your knowledge of the content of basic Economics and demand theory. It also require some type of answering techniques, that we term it as higher order thinking skills (HOT). More of such HOT skills in our Econs tuition lessons.

Prior Chapter: Marginalist Principle | Next Chapter: Theory of Supply